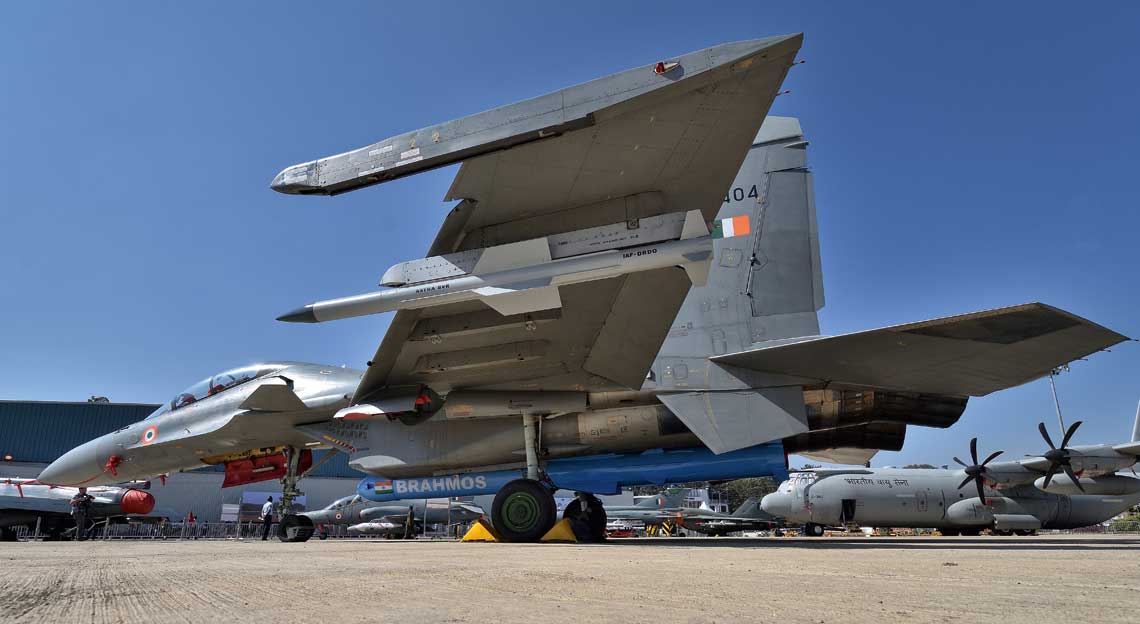 THANJAVUR, TAMIL NADU (PTI): Adding teeth to India's air and maritime dominance in the Indian Ocean Region, a squadron of fourth-generation fighter jets Sukhoi-30 MKI equipped with the BRAHMOS supersonic cruise missile was inducted on Monday at the Thanjavur air force station in Tamil Nadu, the first such base in South India.

The 'Tigersharks' 222 squadron of Sukhoi 30 MKI jets, formally inducted by Chief of Defence Staff Gen. Bipin Rawat, will be tasked with air dominance and maritime role and equipped with the air variant of BRAHMOS weapon system.

The squadron based in this ancient Chola capital, about 340 kms from Chennai, is seen as a "gamechanger" in guarding the strategically important Indian Ocean Region (IOR) that has seen growing Chinese presence of late.

Expected to set right the military balance in the IOR, the Su-30 MKI is a state-of-the-art all weather multi-role fighter aircraft capable of undertaking varied air defence, ground attack and maritime missions.

BRAHMOS, an Indo-Russian joint venture weapon, is a medium-range ramjet supersonic cruise missile capable of being launched from submarines, warships, fighter jets or land. The advanced air variant of the missile, which weighs 2.5-tonne, has a strike range of nearly 300 km.

The BRAHMOS cruise missile travels at a speed of Mach 2.8, nearly three times that of sound.

Air Chief Marshal Rakesh Kumar Singh Bhadauria and senior defence officials were among those present on the occasion of the induction ceremony with the former describing it as a historic day for the Indian Air Force.

"So the role it will undertake is the Air Defence of Southern Peninsula and more importantly, with this special maritime capability in combination of BRAHMOS, it will be in for maritime role in support of nation," Bhadauria said.

A defence release said with the operationalisation of the squadron, the air defence capablilites of IAF, particularly in the Southern Air Command area, will be strengthened.

"This would also provide protection to our island territories and sea lines of communication in the Indian Ocean Region. The IOR is increasingly gaining importance and the presence of a fighter squadron will provide security cover to all our strategic and vital assets in the region," it added.

The Sukhois have a combat radius of almost 1,500 km without mid-air refuelling.

"There has been a gradual to an accelerated expansion of varied maritime forces in the region which could afffect the existing military balance. Therefore, there is a need to protect our military and economic interests in the IOR," the release said in an apparent reference to the Chinese presence in the IOR and the need to respond to it.

China already has a military base at the strategically located Djibouti at the horn of Africa, its first in a foreign nation, and it is also looking at expanding its presence.

Enhancement of the IAF's capability with the induction of the squad was in response to both conventional and non conventional threats in the IOR and to ensure security and stability in the region, the release said.

General Rawat, in his address said the "Tigersharks" underscored "integration," which is the future of the Indian Armed Forces. The Su-30MKI aircraft, along with the BRAHMOS will be a game-changer and extensively enhance the security of the maritime domain, he noted.

The squadron will be operating closely with the Army and Navy to get the ball rolling and thus harmonizing with the armed forces, he said.

While the fighter jets got a water salute, the induction ceremony culminated with a flying display by light combat aircraft, Sarang helicopter display team and Surya Kiran aerobatic team.

Bhadauria, in his address, said it was a historic day for the Indian Air Force. On the decision to choose Thanjavur as the base for the SU 30 MKI squadron, he said it was because of its strategic location.

He complimented the Southern Air Command and all personnel of air force station for their efforts in advancing the induction by almost a year.

Apart from that, the station would also handle all other roles that Air Force would assign in terms of offensive or defensive as part of any other missions, he said.

The 222 squadron was raised at Ambala in 1969 with Sukhoi Su-7 aircraft. In July 1971, it was moved to Halwara and was engaged in combat with the Pakistan Air Force in the 1971 war.

In 1985, the Tigersharks became the first Indian squadron to be equipped with the Mig-27 aircraft and it is now being "resurrected," with the Su-30MKI at Thanjavur.

With the induction, integrated flying training is also set to commence along with the indigenous Tejas aircraft which is already present in Coimbatore.

According to the IAF, latest radars will be deployed in the region to further strengthen its integrated surveillance system.

During the IAF exercise 'Gagan Shakti-2018', the capabilities of this aircraft were amply demonstrated. Also, it showcased an extended air operational range with the help of air-to-air refuelling by the IL-78 aircraft.

The Indian Ocean Region has faced numerous challenges such as drug trafficking, piracy and maritime terrorism and the busiest trans-oceanic trade route.

The IOR is strategically vital as more than 80 per cent of India's energy supply is routed through it and it is likely to grow to 95 per cent by 2025.