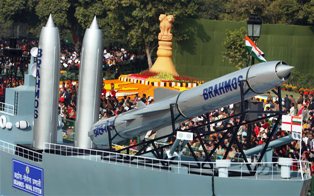 NEW DELHI: The last three months have been really important for Brahmos Aerospace and the Indian Army. Brahmos tasted failure and success during these three months. On January 20th, 2009 Brahmos Aerospace conducted a test in Pokhran test ranges that was witnessed by Dr A Sivathanu Pillai, chief executive officer and MD of the company, General Deepak Kapoor, Chief of Army Staff and the top brass of the Indian Army. The missile took off successfully but due to a software glitch, it missed its target and the mission was aborted. The test of 20th January was declared a failure.

But this failure did not stop Pillai, who came back with a bang in less than 2 months. He requested the Army to witness another test on March 4th. This time the Deputy Chief of Army staff Lt Gen MS Dadwal witnessed the test. As per Pillai, the second test met all the required parameters and it hit its target, a factory sized building; but the Army was evaluating the test results and unfortunately did not come up with any results for three weeks. Finally another test was conducted on 29th March which was seen by a team led by the Director General of Military O erations, Lt Gen AS Sekhon. This time, the target was even tougher.

During the first two tests, the missile was to hit a factory size building but in the third test on March 29th, the missile was to identify a building among a cluster of buildings in an urban environment. And the missile did it with precision. This test proved that the missile was all set to join the Army. It will give the Indian Army an unparallel capability with which the Army will be able to pick the target of its choice in any weather, day/night and in any location. Enemy’s missile defence will not be able to engage the missile that travels as low as 10 meters in it’s terminal phase and has stealth technologies and guidance system with embedded software. BrahMos travels at a speed of 2.8 Mach and up to a range of 290 km and can cruise at a maximum altitude of 15 km. The only cruise missile in active service is the US Tomahawk missile, which has proven its mettle in the Gulf war and the Afghanistan war, but the Tomahawk is a subsonic missile. Two other known supersonic land-attack cruise missiles under development are Fasthawk by Boeing and the French ANS.

But this is not the end of the road for Dr Pillai who is now working to take the missile to new heights. He is working on developing a Hypersonic BrahMos missile that can travel at Mach 5 to 7 which will make it almost impossible to engage the missile with anti-missile defence systems. Dr Pillai confirmed that lab tests had already started and test missiles would be ready by 2010. Test missiles would be flown over rockets motors and would use aviation kerosene and atmospheric air, mixed at a proportionate volume, as the fuel. Looking at the track record of BrahMos Aerospace, the target of 2010 for the hypersonic missile looks realistic.