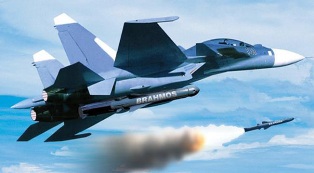 NEW DELHI: Indian scientists have completed development of the supersonic cruise missile BrahMos for all three military services. While the Navy version was the first to be inducted in 2006, the Army ordered $2 billion worth of land-based BrahMos missiles last month. The latest version to be developed - the air-launched version - has a range of 290 kilometers.

Two Indian Air Force Su-30 MKI combat jets have arrived at unknown Russian facilities, where the BrahMos will be mounted on the multirole aircraft for final testing.

The aerial version will be shorter than the standard land or marine versions, and will have the capability to auto-launch toward a target after being released from the aircraft, an Indian Air Force official said.

The BrahMos has been developed by the BrahMos Corp., a joint venture between India's Defence Research and Development Organisation and Russia's NPO Mashinostroeyenia.