Russia locks up Indian combat-aircraft market for decades to come 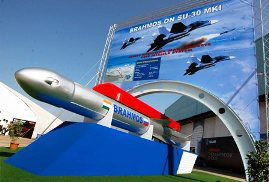 WASHINGTON: Russia has secured its position as the supplier of military aircraft to India for the first quarter of the 21st century, a highly influential Moscow think tank has concluded.

India will continue to buy most of its combat aircraft from Russia for at least the next 15 years because of contracts that have already been concluded and the further deals that are almost certain to develop out of them, the Center for Analysis of Strategies and Technologies concluded in a report titled "The Forecast for Combat Aircraft Deliveries to India," RIA Novosti reported Monday.

The report said the Indian government had already committed to purchasing as many as 90 Sukhoi Su-30MKI combat fighters and is likely to buy more, or possibly extra Mikoyan-Gurevich MiG-29K aircraft.

The sales are likely to become even more impressive. Russia is also seeking to persuade India to buy 126 new MiG-35 Fulcrum multi-role com at fighters worth $10.6 billion. New Delhi has launched an international tender to compete for the contract, but the MiG-35 is widely tipped as the favorite.