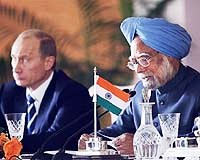 New Delhi: Prime Minister Manmohan Singh on Wednesday that the supersonic cruise missile BrahMos, co-produced by India and Russia, had been inducted into the Navy and would soon be part of the other wings of the armed forces.

Dr. Singh announced this at a gathering of top officers, scientists and engineers from India and Russia and representatives from industrial units involved in the missile's production, while on a visit to the BrahMos Aerospace complex here.

Describing Russia as a ``traditional and trusted'' supplier of defence systems, Dr. Singh said new meaning had emerged through this successful strategic partnership by elevating ties to the joint design, development and production of weapons.

"India is now operating on the frontiers of modern science and technology. The shining example of mastery over complex processes of technology is this joint venture project, BrahMos...This has become a shining example of successful international cooperation," he said.
Dr. Singh, who was at the complex for an hour, was shown the weapon system, comprising the launch vehicle and the mobile command post, as well as the complete launch sequence.