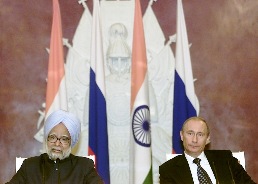 Moscow: Terming Indo-Russian cruise missile joint venture BrahMos as a brilliant example of pooling of global efforts in developing new weapon systems, President Vladimir Putin today asked the military-industrial complex of Russia to go in for more such joint ventures with foreign countries. BrahMos is a brilliant example of such cooperation and in ten years this company has traveled the path of designing of experimental models to the organisation of serial production and supplies for induction into service, Putin said at the annual wrap-up meeting of the government commission on military-technical cooperation with foreign countries.

Putin also called for setting up of joint ventures in foreign countries for after-sales-services of the Russian origin military hardware and named servicing centres in India and Malaysia as an example.

He noted that the joint ventures in defence not only cut the development and production costs, but also establish long-term partnership between the nations.

The analysis of tendencies of the world arms market demonstrates that not a single nation today possesses the whole spectrum cutting-edge technologies and many lack funds required for complex knowledge-based weapons, Putin said.