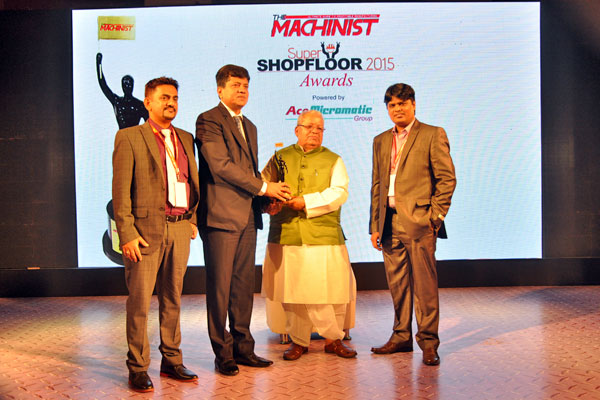 NEW DELHI: The Machinist Super Shop Floor 2015 Awards' ceremony held on May 22 at The Westin Pune was a grand success. The awards ceremony saw some of the finest manufacturing plants in India getting honoured and awarded as 'Super Shop Floors 2015'.

Shri Niranjan Mudholkar Editor & Chief Community Officer - B2B, Worldwide Media Pvt Ltd of The Times of India Group said: "Shri Mishra becomes the first to receive the honour under the magazine's "Editorial Choice Awards" category for his visionary leadership skills in taking BrahMos Aerospace to the next level as well as for his consistent endeavours and emphasis on increasing the indigenisation of BRAHMOS supersonic cruise missiles in the national interest.

"We believe Mr Mishra has successfully brought a corporate edge to the two-nation Joint Venture missile manufacturing organisation without compromising on the basic principles and values of the joint venture.

"The BrahMos MD & CEO also deserves to win this award because he is directly serving the nation while executing his responsibilities. It is a privilege for us as well that we are able to honour one of India's finest missile scientist and technocrat with the first edition of this award," Shri Mudholkar said.

The award was handed over by Shri Kalraj Mishra, Honourable Union Minister of MSME, Government of India to Shri Sudhir Mishra.