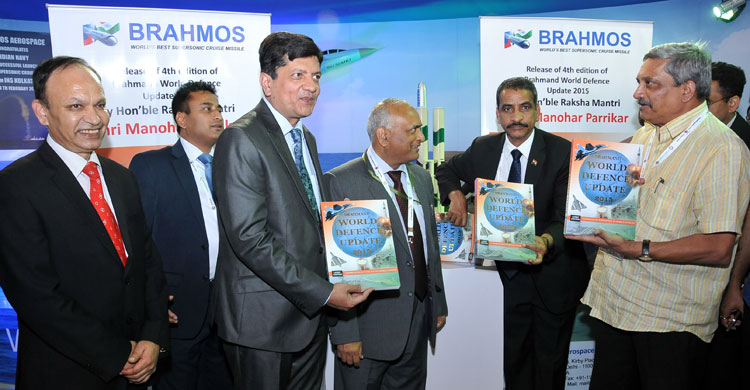 Shri Sudhir Mishra, CEO & MD of BrahMos Aerospace, handed over the first copy of the yearbook to Shri Parrikar. The Foreword of the yearbook has been written by Honourable Raksha Rajya Mantri Shri Rao Inderjit Singh.

Brahmand World Defence Update 2015 provides incisive, comprehensive and up-to-date facts, figures and data on the armed forces around the world.

Besides covering military capabilities of 113 countries worldwide including 33 strategic ones, the book, in its latest issue, has covered a comprehensive overview of missile technology aspect for some of the leading nations.

The book has comprehensively complied defence-related data for 113 countries by listing their weapons inventory, current and future arms procurement plans, important political and defence personnel and defence spending along with their conflict areas, internal as well international.

The yearbook promises to be a vital source of reference for the armed forces and defence establishments worldwide and also for research institutions, academia, think tanks, captains of industries and even for the general readers keen to know about military-related developments.