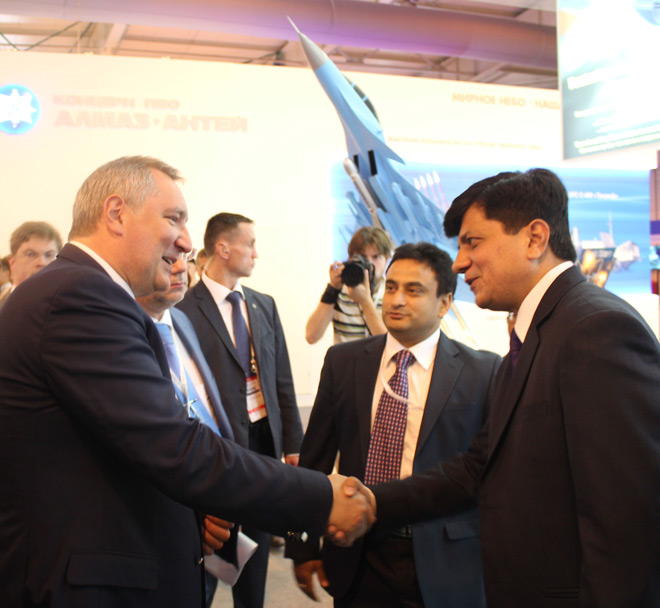 MOSCOW: Russian Deputy Prime Minister Dmitry Rogozin, who is also in charge of all the defence Industries of Russia, with a high-level defence delegation, visited the BrahMos Aerospace pavilion during the inauguration of the Engineering Technologies-2014 exhibition in Moscow on 14th of August 2014.

"BrahMos Aerospace is a prominent example of successful cooperation in the High Technology arena before the world and should be a benchmark for futuristic collaboration between both the friendly nations," Dmitry Rogozin on completion of his visit remarked.

"We are very pleased that our partner country has such potent high accuracy weapon system which has been developed jointly. We should continue to evolve our system so that we remain the leaders in the years to come," he added.

He was shown the BrahMos pavilion with detailed explanation of the full weapon complex given by Mr. Sudhir Kumar Mishra, CEO & MD BrahMos.

"BrahMos together with DRDO and NPOM, the two JV partners from India and Russia, have initiated work on a missile system which would be sleeker, lighter and highly precise over its predecessor, the existing BRAHMOS, to ensure its usage from multiple platforms. We hope to have the system within three years ready for demonstration trials," Sudhir Mishra briefed Rogozin.

The new weapon would be called BRAHMOS-Mini.

Mr. Mishra also informed that the integration trials of BRAHMOS air-launched version with the SU-30MKI fighter are nearing completion and "by early next year, we will start its demonstration launches".

Mr. Rogozin who was accompanied with Steven Seagal the famous Hollywood actor ensured full support of the Russian Federation to BrahMos and wished success to the entire team in the futuristic plans of the JV.