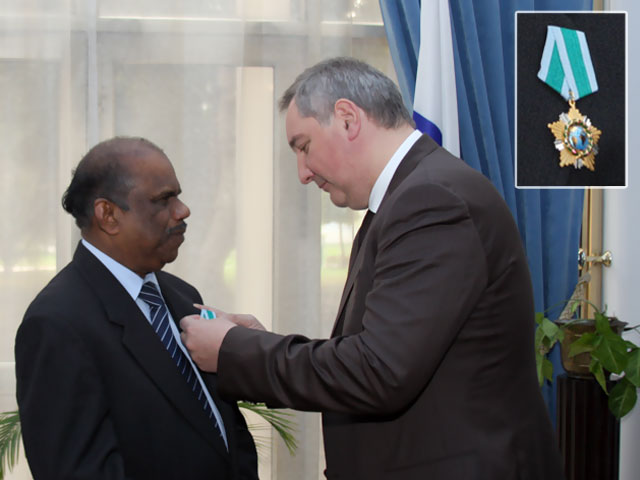 NEW DELHI: The Deputy Prime Minister of Russia Mr. Dmitry Rogozin presented the prestigious 'Order of Friendship' award to Dr. A. Sivathanu Pillai, Distinguished Scientist and CEO & MD, BrahMos Aerospace on the 26th of Feb. 2014 at the Embassy of Russia in New Delhi.

The award, the highest Russian honour bestowed on foreign citizens, was conferred upon Dr. A.S. Pillai by the President of Russian Federation, Vladimir Putin, for his great contribution to the strengthening of friendship and cooperation between India and Russia.

"I have the honour to decorate Dr. AS Pillai with 'Order of Friendship' award signed by the President of Russian Federation H.E. Vladimir Putin for his great effort invested in large scale work in the science & industry for the benefit of both India and Russia," said Mr. Rogozin.

The Dy PM, during the award ceremony, was briefed by Dr. Pillai on the latest achievements and progress the Joint Venture has made in the recent years.

He was also apprised about the present status including the Air Version development and 'Vision 2050' which has got three major programmes - BRAHMOS-Mini, C4I (network centric BRAHMOS deployment) and Hypersonic BRAHMOS-II.

Expressing his highest level of satisfaction on the progress Mr. Rogozin remarked, "BrahMos is a hallmark of strong friendship and strategic partnership between our two nations."

Dr. A.S. Pillai also highlighted the enormous efforts from the Indian and Russian scientific communities to realise the best system in the world. He thanked the Russian Government for the trust bestowed on the Joint Venture.

BrahMos Aerospace is a successful Joint Venture between India and Russia. Both the Governments have recently agreed to continue their unwavering partnership in the BRAHMOS missile programme by extending the Inter-Governmental Agreement (IGA) for an indefinite period.