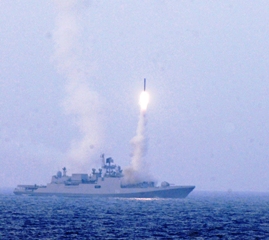 "For the first time, the BRAHMOS cruise missile was fired in salvo mode from the Russian-built warship off the coast of Karnataka with an interval of three seconds off the coast of Goa," a DRDO official said here.

After the successful test last week, eight cruise missiles could be fired in salvo mode in future, the official said.

The two-stage missile, the first one being solid and the second one ramjet liquid propellant, has already been inducted into the Army and Navy, and the Air Force version is in final stage of trial, a defence official said.

While induction of the first version of BRAHMOS missile system in the Indian Navy commenced from 2005 with INS Rajput, it is now fully operational with two regiments of the Army.

The Army has so far placed orders for the BRAHMOS missile to be deployed by three regiments and two of them have already been inducted operationally.

The Defence Ministry has also given a go-ahead to Army to induct a third regiment equipped with the missile system to be deployed in the northeastern state of Arunachal Pradesh.

Brahmos Aerospace, an Indo-Russian joint venture company, is also working to develop the air launch version of the missile system and work on the project is in progress.