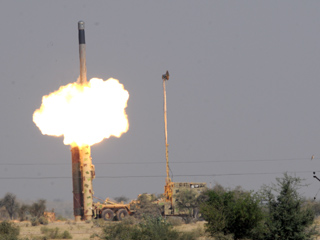 POKHRAN: Indian Army on Monday successfully test fired an advanced version of BRAHMOS supersonic cruise missile system at the Pokhran test range in Rajasthan as part of a user trial.

Following its predetermined trajectory, the missile successfully pierced the designated concrete structure at "bull's eye" owing to its sheer velocity.

"The launch has successfully validated the deep penetration capability of the supersonic cruise missile system against hardened targets," a company official said.

The launch was witnessed by high ranking Army officials. Corps Commander Lt. General Amit Sharma, who witnessed the launch along with GoCs and other senior officers, congratulated the operational Army team for the successful launch.

CEO & MD of BrahMos Aerospace along with senior officials from the MoD and scientists from DRDO and BrahMos also witnessed the launch.

The Army has inducted two regiments of the cruise missile in its arsenal, while the third regiment induction is in progress.

The sanction by the Government for the fourth regiment of the highly maneuverable steep dive capable missile for deployment in hilly terrains is awaited.

The 290-km BRAHMOS flies at a speed of 2.8 Mach and carries a conventional warhead of up to 300 kg. The missile can be launched from multiple platforms including land, sea, sub-sea and air.

Both the Army and Navy have already inducted the missile in service, while the air-version of the weapon is scheduled to be flight tested by the IAF soon

BRAHMOS has been developed by India in partnership with Russia.