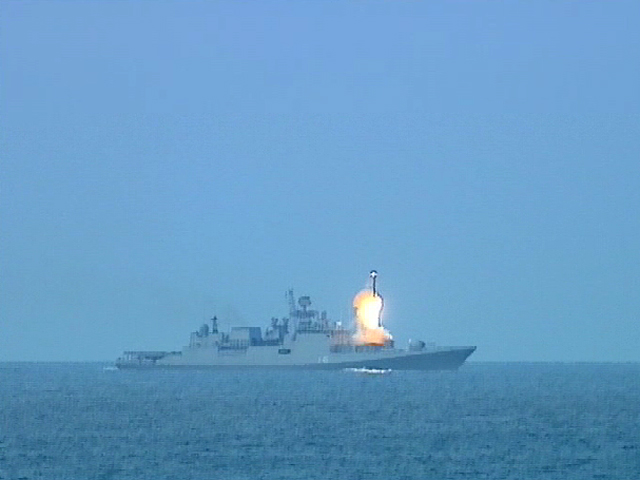 The missile performed high-level "C" manoeuvre at pre-determined flight path and successfully hit the target. The surface-to-surface missile, having a range of 290-km, was test launched from the Russian-built Project 1135.6 class warship at 1100 hrs on the 22nd of May 2013.

The launch was carried out by Indian Navy as part of Acceptance Test Firing (ATF) of the ship.

Indian Navy commissioned INS Tarkash on 9 November, 2012. The warship along with two other frigates of the class - INS Teg and INS Trikand have been built as part of a $1.6 billion contract signed between India and Russia in July, 2006. INS Teg was commissioned on 27 April, 2012 and the commissioning of INS Trikand is expected soon.

The advanced warship has been fitted with an upgraded multi-role combat suite to make it one of the most potent platforms of the Indian Navy.

All the three ships will be equipped with 8 vertical launched BRAHMOS missile system as the prime strike weapon.

The new missile frigates are designed to accomplish a wide range of maritime missions, primarily hunting down and destroying large surface ships and submarines.

The vertical launch configuration of BRAHMOS enhances the stealth capabilities of the ship as the missiles are under the deck and not exposed. The Universal Vertical Launcher (UVLM) being used in these ships has a unique design, developed and patented by BrahMos Aerospace. The same also ensures manoeuvring of the missile in any direction after launch, independent of ship movement, thereby providing the surprise attack concepts to the ships.

Jointly developed by India and Russia, the BRAHMOS missile has a flight range of up to 290 km and is capable of carrying a conventional warhead of 300 kg. The missile can cruise at a maximum speed of 2.8 Mach.