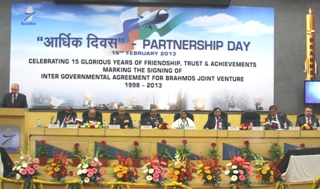 NEW DELHI: BrahMos Aerospace on Tuesday celebrated "Aardhik Diwas" - Partnership Day, to commemorate 15 years of signing of the Inter - Governmental Agreement (IGA) between India and Russia, for the formation of BrahMos Joint Venture.

On February 12, 1998, India and Russia set up the JV, BrahMos Aerospace, through an Inter Governmental Agreement, to jointly design, develop, produce and market the BRAHMOS missile system. In his welcome address CEO and MD of BrahMos Aerospace, Dr. A Sivathanu Pillai, gave a brief account of the growth and evolution of the Joint Venture.

Giving a special address on the occasion, Defence Minister A K Antony said, the Joint Venture has made a remarkable progress since its inception and urged the two partners to take the relationship to a higher level.

"BrahMos has made remarkable progress overcoming many difficulties and its achievement is outstanding. The difficulty it has overcome in an attempt to build the Joint Venture is a unique and special experience which has today become a shining example of Indian-Russian military and technological cooperation," he said.

BRAHMOS is considered as an important weapon system by the Services because of its "speed, precision and power" and is a customer's delight, Antony said and applauded the team and industries involve in the project both from India and Russia.

BRAHMOS is a formidable weapon system. It has offered more punch and strike capability for the three services. "We owe it all to Dr. AS Pillai and Dr. A G Leonov, Director General NPOM. It is because of the zeal and enthusiasm of Dr. Pillai that we have reached this stage," Air Chief Marshal NAK Browne remarked.

He added that the modified Su-30 Mk-I aircraft will soon be equipped with BRAHMOS missile.

Terming the Joint Venture as a unique model of cooperation, DRDO Chief and Scientific Adviser to the Defence Minister, Dr. V K Saraswat, said it is high time that the defence and research organisation follow the successful model of BrahMos Joint Venture. "BrahMos is different. We see the difference and its achievements speak of the result." He also congratulated the BrahMos team for their outstanding performance.

Dr. A S Pillai and Dr. V K Saraswat who were recently conferred with the "Padma Bhushan" Award were felicitated today at the grand event.

Avinash Chander, CC R&D (MSS), recepient of "Padmashri" award and Dr. A A Dergachev, Chairman BrahMos Board who was conferred with the prestigious "Order of Friendship" award by the Russian Federation were also honoured on the occasion.

In 2012, the Government of the Russian Federation honoured BrahMos JV with the "Golden Idea" award for making outstanding contribution in the successful development of BRAHMOS cruise missile. Marking the achievement, today BrahMos Aerospace feliciated Dr. A G Leonov, DG, NPOM during the celebration.

BrahMos also awarded many other achievers in different categories in recognition of their important contribution in building the project and for their outstanding performance, including the "Best Student Award" for Innovative Ideas in Science & Technology.

A Coffee Table Book on BrahMos was released by AK Antony and Dr. AS Pillai on the occasion. It offers a window on the last 15 years as BrahMos takes on a journey through familiar and strange world, unknown and innovative besides moving and beautiful images of famous events and people, historic moments, ground-breaking work and insightful portraits.

A panel discussion on Inter Governmental Relationships & High Technology JV's was organised on the sidelines of the event, provided a unique platform to deliberate on and explore new avenues to expand Indo-Russia strategic partnership and to use this successful role model- BrahMos for future projects.