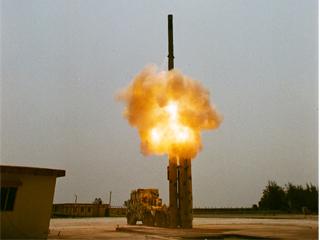 During the launch at around 1130 hrs, the missile flew through the designated 290 kms distance at Mach 2.8 and achieved high precision with steep dive once again, a defence official said.

"The network of telemetry stations and down range ships confirmed that the missile followed the pre designated flight path," he said.

When contacted, Dr. A S Pillai, CEO and MD, BrahMos Aerospace, confirmed that it was a text book launch achieving 100% results.

The cruise missile, a surface-to-surface Army version, was test fired as part of user trial by the Army.

Defence Minister A K Antony has congratulated the Indian Army and the BrahMos team for the successful launch of BRAHMOS.

The BRAHMOS missile has a flight range of up to 290 km and capable of carrying a conventional warhead of 200 to 300 kg.

The Army and Navy have already inducted the missile. BRAHMOS is now fully operational with two regiments of the Army.

The Indian Ministry of Defence has also given a go-ahead to the Army to induct a third regiment equipped with the missile system to be deployed in Arunachal Pradesh along the China border.

The missile was completely integrated at the BrahMos Integration Complex at Hyderabad.