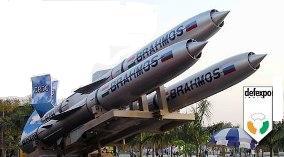 The billion annual global defence market is tough to crack. It's a market in which politics, diplomacy, and murky deals ensure the dominance of a select few.

But for the first time, two Indian products - the Dhruv helicopter and the BrahMos missile - are making waves in the international arms bazaar. The high-profile marketing of these products is being aided by two of the world's most powerful arms-manufacturing nations: Israel and Russia.

Coincidentally, Chile could also be the first buyer of the BrahMos. Preliminary discussions have begun and at last week's meeting between Defence Minister Pranab Mukherjee and Russian counterpart, Sergei Ivanov, the latter consented to the sale.

Defence ministry officials believe the sheer quality of BrahMos should garner a huge market. It is the world's only supersonic missile and is believed to be superior to America's Tomahawk cruise missiles.

"Several countries are interested in the BrahMos and we are talking to them", said A Sivathanu Pillai, chief controller of the Defence Research and Development Organisation. He refused to say more.

BrahMos Aerospace, the Indo-Russian joint venture based in New Delhi, which manufactures the missile in its factory in Hyderabad, has been exhibiting the weapon at various international shows, the latest being in Thailand last month.