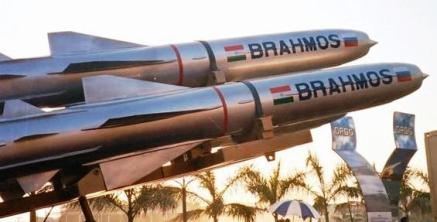 NEW DELHI: The Indian Army is trying to get the government to buy it two more regiments of BrahMos block II missiles. Each regiment would have 61 missiles, 12-24 mobile launchers and two mobile control centers. The new regiments would have a more advanced version of the missile than the existing BrahMos block I regiment (with five mobile launchers). The first regiment cost $83 million. The block II missiles are more accurate and reliable at hitting pinpoint targets (like headquarters or technical installations) in crowded urban environments.

Two years ago, India ordered 800 more of the new PJ-10 BrahMos missiles. The Indian Army plans to buy 80 launchers in the next ten years. Russia has not yet ordered any BrahMos, while India is also working on lighter versions for use by aircraft and submarines. The 3.2 ton BrahMos has a range of 300 kilometers and a 660 pound warhead. Perhaps the most striking characteristic is its high speed, literally faster (at up to 3,000 feet per second) than a rifle bullet. Guidance is GPS or inertial to reach the general area of the target (usually a ship or other small target), then radar that will identify the specific target and hit it. The warhead weighs 660 pounds, and the high speed at impact causes additional damage (because of the weight of the entire missile.)

India and Russia developed the weapon together, and now offer the BrahMos for export. The high price of each missile, about $2-3 million (depending on the version), restricts the number of countries that can afford it. The weapon entered service with the Indian navy in 2005. Different versions of the PJ-10 can be fired from aircraft, ships, ground launchers or submarines. The maximum speed of 3,000 kilometers an hour makes it harder to intercept, and means it takes five minutes or less to reach its target. The air launched version weighs 2.5 tons, the others, three tons or more.

Lacking money to finish development and begin production, the Russian manufacturer eventually made a deal with India to finish the job. India put up most of the $240 million needed to finally complete two decades of development. The PJ-10 is being built in Russia and India, with the Russians assisting India in setting up manufacturing facilities for cruise missile components. Efforts are being made to export up to 2,000, but no one has placed an order yet. Russia and India are encouraged enough to invest in BrahMos 2, which will use a scramjet, instead of a ramjet, in the second stage. This would double speed, and make the missile much more difficult to defend against.

India indicates it plans to make the missile a major weapon system. The BrahMos can carry a nuclear warhead, but is designed mainly to go after high value targets that require a large warhead and great accuracy. The BrahMos could take out enemy headquarters, or key weapons systems (especially those employing electronic or nuclear weapons.